Clare Wilkins, Chef at Cwrt Enfys Care Home in Ystradgynlais, has been named ‘Care Cook of the Year’ for 2014. Clare, last year’s runner-up, was named the winner of our hotly contested annual competition following a cook-off between herself and three other chefs from across Hallmark Care Homes.  Denise Englefield (Alexandra Grange), Dawn Ingram (Tuxford Manor) and Daniel Cole (Shire Hall) also all made it through to the final, held at Unilver’s headquarters, after submitting an inspiring three course menu suitable for residents in their home. After familiarising themselves with the state-of-the-art kitchen, used by Unilever to test and develop new products, the finalists were given an identical ‘mystery box’ of ingredients and timeframe of 90 minutes to create their dishes. 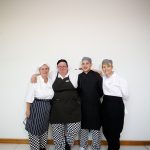 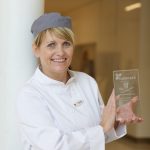 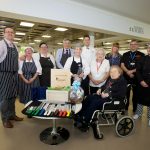 Judges on the day were Paul Wright (Executive Development Chef – Unilever), Scott Sinfield (Marketing Manager – Hallmark Care Homes) and last year’s winner and National Care Awards finalist: James Clear from Bucklesham Grange Care Home in Ipswich. As if that wasn’t daunting enough for the finalist, there were two very special guest judges in the form of two residents from Kew House in Wimbledon! Marian Maitlan and Nancy Stone joined the other judges in marking the dishes for originality, presentation, and flavour and menu design. The scores were unbelievably close but it was Clare Wilkins from Cwrt Enfys who was handed the much-coveted ‘Care Cook of the Year’ trophy along with a hamper full of goodies. Clare’s winning menu: Starter – Leek & goats cheese pastry Main – Pork stroganoff with vegetable Rice and sweet potato fries Desert – Blueberry & raspberry pavlova. Roy Garland, Group Hospitality Services Manager for Hallmark Care Homes and organiser of the competition, said, “The residents helping to judge really made a difference this year. Their input is invaluable and they really enjoyed the experience. The fact Clare was runner-up last year and has returned to be crowned winner this time around is a testament not only to her desire and passion, but also the importance our chefs place on this competition.”