Resident shares her story of living in London during WW2

Patricia Mann, 95, who lives at Anisha Grange, our multi-award-winning care home in Billericay, Essex, has shared her experiences of working in and around London as part of the Royal Air Force in World War Two.

I grew up in Westmoreland Place in Shoreditch, London. We were very poor and lived in an eight bedroom house with three other families. I remember the war being announced on the radio by the Prime Minister at the time, Neville Chamberlain and every person in the house was scared. Things were made worse when, ten to twenty minutes after the announcement, the air raid sirens went off. My father owned a garage, and we quickly ran and hid in it, although if a bomb had landed, I do not think it would have saved us.

As the war went on, I was called up to volunteer as I was eighteen years of age. Women could work in the navy, army, air force or go into nursing. I wanted to be in the navy, as I had a number of friends already serving. However, I did not get in and instead, got sent to work in the Royal Air Force. The first six months of my time in the air force was spent in Cardiff, where we did all the training and square bashing. This is where we learnt how to perform our wartime roles, as well as being taught how to salute, march and do all the other typical military things.

I cannot say I enjoyed my role in the air force, as I was a pencil pusher in the War Casualties Accounts Department. This role involved trying to locate airmen who had gone missing in action. I started my role in Uxbridge, on a Royal Air Force base. This was a strange experience for me, however it was also a strange experience for the men already on the air base! We were some of the first women that had been on the base for a prolonged time, and some of the men were very uncomfortable with the changes. That is not to say that the ladies did not enjoy going out for a night on the town with some of the gentlemen on the base!

In 1941, when America joined the war, some of their soldiers and airmen came to join us on the base. We were incredibly excited when they arrived because they bought sweets, chewing gum and cigarettes with them, which were nearly impossible to come by in Britain due to the increasingly harsh rationing as a result of the war.

However, due to our new arrivals from across the Atlantic, there was little space for us ladies on the air base, so some of us were transferred to other places. I was lucky enough to be transferred and sent back home to London – more specifically, Harley Street. This was not as fancy as most would think. We predominately worked in one of the Crown Properties, which was an empty house with no furniture, decorations or even curtains! I did not enjoy Harley Street, because it was so plain and boring but I was able to move home and live with my sister and her partner.

One of the most difficult things about the war was definitely trying to avoid the bombs! At the start of the war, the air raid sirens were terrifying and people would run around desperately trying to find somewhere to go and hide. However as the war dragged on, and buildings were destroyed and people, including my own father, were killed, people got used to the noise and the explosions, and we all learnt to adjust. This was not to say that I was not shocked and devastated when my family’s home in Middleton Road was bombed on Boxing Day and my father was killed, and family heirlooms and memories were all destroyed. There was another occasion when I was walking along Tottenham Court Road, and a bomb was falling and you could not tell where it was going to land. When it did eventually land and explode, it was very difficult to avoid the many pieces of housing debris and pieces of shrapnel that came along with the exploding bomb.

Fortunately, the war did eventually end and everything slowly went back to normal. I married a sailor named Charles whom I met dancing before the war and we went on to have a son, named Phillip. My husband worked for the electricity board after he left the Royal Navy and I went on to run my own sweet shop in St Albans, which I thoroughly enjoyed because I had always dreamed of running my own business since the age of 11.

I am incredibly lucky that I have lived the life I have and I am blessed that I can still manage to talk to people and tell them all about my life. 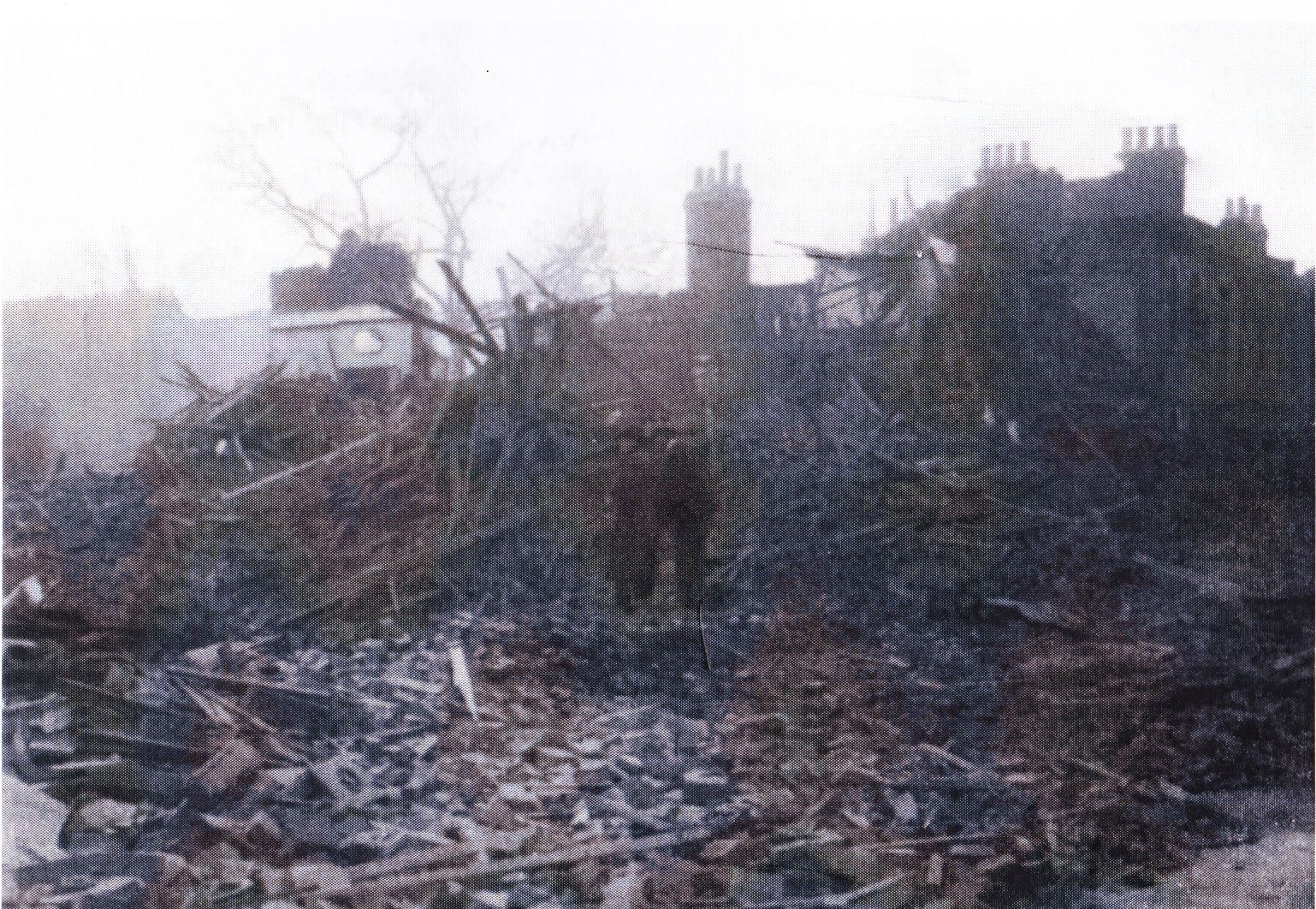 Middleton Road, London in the aftermath of the bomb explosion on 26th December 1940