My story by resident Bill Lockey Ex REME WO2

Bill Lockey Ex REME WO2, 96, who lives at Anisha Grange, our award-winning care home in Billericay, Essex, has shared with us his experience of how he fought in the Second World War, and against all odds, survived.

I was born in 1922. I lost both my parents when I was just two and I was put into a care home in Worcester with my brother and three sisters.

I was adopted when I was 11 by two people who were quite lovely but very old-fashioned. My adoptive father was awarded a military medal for his bravery in the First World War and later ran the Royal Albert Orphanage with his wife. They sent me to live in the country in Malvern with their parents. In those days, you were put out somewhere to work, and I was more or less their houseboy.

I was quite happy there. Although they were very strict people, I had the run of the place because there were no other children there. I used to go all over the Malvern Hills and I had a good time.

At fourteen and a half years old, I took an exam to go to a tech college in Wales and I got a scholarship and was there for three years. That was in 1936. After the three years, the Second World War started and I was automatically posted to the army.

I joined the army as an Apprentice Tradesman in general engineering, and I learned all about mechanics. I was posted to Bognor Regis in 1940 and put on night duty. Every 50 yards, there would be someone with a rifle and 50 rounds of ammunition, and I was one of those people. If anything moved, you had to fire at it. Of course, nothing came up because there is no port at Bognor Regis. 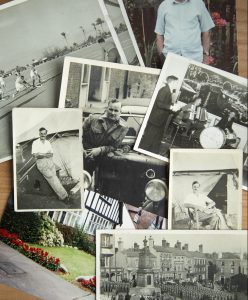 Shortly after, I was on the parade to go on my first foreign tour. I was all dressed up ready to go and the officer came around and said “How old are you, boy?” and so I said I was seventeen and a half and he said “Well, you’re not going then” and they took me off the draft. After a few months I turned eighteen and they sent me to Nigeria, where I was attached to the Royal West African Frontier Force. We went by ship across the North Atlantic and landed on the West African coast to start jungle training. Although we were mechanics, we had to learn to throw grenades and duck and dive if we had to, but luckily, I didn’t have to fight.

It was there that I got malaria twice. The first time I had malaria I was in hospital in Nigeria, but they didn’t have the drugs they have today. They used to give us a bottle of Guinness to drink each night and I soon got over it. The second time I got malaria, my adoptive parents called the War Office to see if I could come home because I was too ill. It makes you feel awful; you can hardly get out of bed because you become very weak. I flew from Tripolitania, now known as Libya, to London Airport in a two-engine Avro York plane at about 200mph.

When I was well enough, I returned to Nigeria and there I was attached to the 82nd (West African) division, who were supposed to be going to Burma. Because I went home to get better, when I returned, the ship had gone so I didn’t go with them to Burma. I later learned that as they got there, they were all captured by the Japanese. Most of my friends were killed and the people I knew were gone. I was lucky. Somebody asked me the other day what I did in the war. I said “I survived!”

After that, I became a sergeant and I went into anti-aircraft command looking after all the generators that were firing the guns. Because I had previously learned about engineering, I knew what I was doing, and we all used to work through the night to keep the guns working. That was just towards the end of the war.

When the war was over, I was posted out to the Far East. It took three weeks to get there because you went on the ships
in those days. I went to Korea and Hong Kong, Malaya, Egypt and many other places all in the space of about five years.

When I was in Malaya, I was posted to a unit in the jungle area because we had a compound of vehicles and I was Duty Officer then, ensuring all the vehicles were maintained. I was on my own and I had to be on that compound all night because bandits were in the area and that was pretty scary. Just one person manning the whole thing. I had Malayan units near me if I had problems but that was about half a mile away. The officer said “All you have is a revolver and five rounds of ammunition.” I said “What’s the five rounds for?” He said “Four for the bandits and one for you if you get caught.”

When I returned from the Far East in 1941, I was posted around the UK for about two years. It was in Southend that I met my wife, Ellen. She was in the Auxiliary Territorial Service doing admin work, and we married in 1944. We had our first child, David, in 1946 and our second, Ellen, in 1959, who have now both unfortunately passed away.

When I came out of the army after twenty-two and a half years’ service, I worked as a Farmer because I liked the country life. I bought a caravan and we lived in Chippenham in Wiltshire. We lived on the farm for about a year or so and I was looking after the machines. Then I started working for Westinghouse Railway and I worked in their lab. I then moved from Chippenham to Dagenham. I used to build engines there, for Cortinas and lots of other cars.

I was born with a blithe spirit. Even today I’m hopeful and cheerful. You have to face up to a lot of things as you go through life. I just remain positive really and I still keep a good outlook even now. I’m not fearful at all. I am well looked after here and like living at Anisha Grange because everyone is cheerful and there are no grumpy people around.

Whatever comes along – mistakes, I don’t worry about that. My life was so full of adventure, and it still is.