Depression In The Elderly And How To Manage It 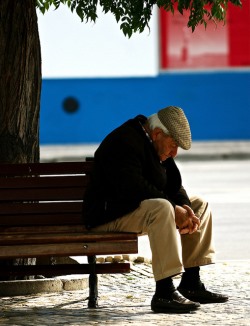 It’s a sad fact but as we age we become more susceptible to depression. Recent studies have revealed that about 25% of retirement-age people suffer from some form of depression and in people over 85 this increases to 40%.

Although its effects on a person’s mental wellbeing can be profound and devastating, depression is also closely intertwined with physical illness. Older people who suffer from two or more chronic conditions are seven times more likely to suffer from depression, and it rubs the other way too. Diagnosis of depression in people over 65 increases subsequent mortality rates by 70%.

When you consider that the number of people over 75 in the UK is set to double in the next twenty years you can see why tackling depression in the elderly is a major concern.

Depression is often underdiagnosed in older people because we seem to accept a certain degree of mental malaise as a natural part of ageing. In fact, depression in the elderly is no more a natural condition of getting older than illnesses such as dementia. Although old people may be more susceptible to these conditions, it’s not simply the way of things.

A few of the risk factors for depression in the elderly are:

If you know an older person who has any of these problems be sure to keep an eye out for signs of depression.

Depression can present in many ways. They may be refusing to engage in activities they previously enjoyed or staying in bed for most of the day. Another indicator could be a loss of appetite or a failure to maintain personal hygiene.

If you suspect an elderly relative or friend is suffering from depression it’s vital you get them to consult with their GP, or if they live in a care home, or have home care, then talk to their care givers.

An initial diagnosis will be made and if depression is indicated then steps will be taken to tackle the symptoms and cause of the illness.

Depression can be caused by organic conditions, such as diabetes and kidney disease, so these factors will need to be ruled out first. Also certain medications or combinations of medicines can cause depression so this will also need to be looked at. Then some psychological tests will be done to try and pin down the causes of the depression.

Although it’s best to leave diagnosis to the professionals you can help by just being there. Listen to the concerns of the individual. Spend some time with them. In cases of mild to moderate depression social interaction has been shown to make a vast improvement.

Also try to encourage them to take some gentle exercise if appropriate. The act of exerting our bodies releases all kinds of chemicals in the brain that result in a positive mood.

Depression in the elderly is a very serious condition. Don’t accept your relative or friend’s drop in mood as just one of those things. If you’re concerned then seek professional advice to ensure the safety and wellbeing of those you love.