My story by resident Mary Grant

Mary, 97, who lives at Admiral Court, our Outstanding care home in Leigh-on-Sea, has shared with us what it was like to grow up in Egypt, and her experience of meeting King Farouk.

I was born in Alexandria in Egypt on the 13th of July, 1923. My father had a successful business. He was one of the first men in Egypt to open a cobbler shop. My mother was a housewife and she looked after me and my 12 siblings. I was second from youngest and my older siblings lived all over the globe, some in America, and some in France and I was fortunately able to visit them quite a lot.

I went to a French school in Egypt and it was there I learnt to speak Arabic, French, Italian, English, Spanish and Greek. My family and I had a nice life. We lived like kings and queens.

I left school in 1941 when I was 18 and I moved to a flat which was near the pyramids. I can recall the day I saw King Farouk. I was in a bar and he was there. He said to the Manager, ‘who is that beautiful lady with the black hair.’ He wanted the Manager to introduce him to me but I was in a relationship with the musician who played at the bar. When I tell the story now, my grandchildren always say ‘oh Grandma! You could have been the queen of Egypt!’ 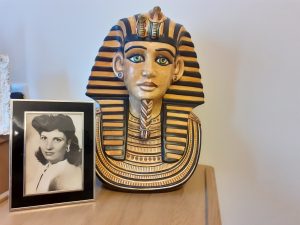 A little later on, in 1952, Gamal Abdel Nasser came to overthrow King Farouk, and we all had to leave Egypt. The change in government meant that those of mixed culture, who were not with a full Egyptian heritage, had to leave the country – it was safer. One of my sisters was married to an Englishmen and she had already moved to England before the revolution had begun. After living in Egypt for 30 years, my sister helped me get my papers to join her overseas. I went to Paris first to see one of my sisters who lived there for a holiday and then I moved to Lewisham in London.

I got a job working at the Houndsditch Warehouse, a large department store near Aldgate in London’s East End. Because I could speak so many languages and our clients would come from all over the world, they put me in the accounts department working for the Manageress. She used to say that I was good with furs and fabrics and knew the best prices and brands.

After I had been working there for a while, she would ask me to go to the other side of the warehouse to collect a dozen dresses for her to sell. Each item had two prices, a wholesale price and a selling price. I realised that she was writing a lower price on the invoices than the money she had taken. I never said anything because it wasn’t my business but another friend that was working with me went and told the Governor. Of course, he sacked her and he offered me the job as Manageress, managing three departments – furs, fabrics and beautiful gowns, and so I said yes. I bought clothes from the manufacturers and sold them to people who would come into the warehouse.

One day, one of the manufacturers came in with a beautiful fur coat and I wanted to buy it – instead, he very kindly gave it to me for free. I thought I would keep it but I have since given it to my granddaughters. They don’t wear it because it’s real fur but they say they will keep it forever as a memory of me.

I was the Manageress at the Houndsditch Warehouse for a long time. After our encounter all those years before, King Farouk would often buy hundreds of dresses for his family and we chatted together in French and classical Arabic about our homeland.

It was at the warehouse that I met my husband, David. He was working as a carpet and furniture buyer. David asked if I would go out with him, but like any young woman, I said that I had to ask my sister first. In any case, I spoke to my sister and she said ‘go out with him – for one night and see what he is.’ He was the best man I ever met. We worked together too for many years. David’s Manager retired and so he took over the position. David and myself were married for 54 years before he passed in 2018. He was the best husband I could ever have wished for.

Although I have travelled all over the world, and David used to take my family on holidays to lovely places, my fondest memories of my life are with my daughter, Tina, who sadly passed away last year. I am also blessed to have two granddaughters, Nicky and Alison and four great-grandchildren, Sophia, Daniel, Sam and Rachel.

I’ve lived at Admiral Court Care Home for a year and a half and I can’t complain. Everything is merry and the carers are very, very nice.